What should you look for to ensure a contest is truly natural?

1. First and foremost every natural contest should have a publicly posted list of banned substances (see NPF Banned list ) so that you know in advance what is being tested for.....no excuses.

2. A lab report provided for each tested athlete that is a 100% match to the org's banned substances list, meaning that EACH and EVERY substance on the banned list is also shown on the lab report.  Many labs breakdown substances by classifications or "panels" (Steroids, Stimulants, Diuretics, etc.).  Promoters have the ability (and discretionary responsibility) to order and pay a separate fee for each test panel.  Partial lab reports reflect a promoter who only asked for, and therefore was only willing to pay for, one panel and this practice is a sure red flag that the promoter is cutting corners (to save $$$) and is NOT taking drug testing seriously.  Ask yourself, do you really want to stand on stage next to athletes who are using hard core diuretics and stimulants to get leaner than you? Most insulting is that they don't give YOU, the athlete, any credit for knowing the difference.  Worse yet is the complete absence of a lab report. Every promoter that sends a urine sample to a testing lab will receive proof (aka lab report) of that sample's testing results. When this occurs, it is as simple as forwarding a copy to the athlete who is listed on the report.  No lab report means your sample wasn't sent to the lab, period! And, remember, drug testing does not take place in the restrooms at the venue, it takes place in a real lab in the days following a contest.  NOTE: testing kits (cups, forms, FedEx mailers, etc) are willingly sent FREE to a promoter - as many as they want! The lab (like Redwood Toxicology Labs) will happily send all the cups and forms a promoter requests, no questions asked. That is because a promoter who has cups, forms and mailers (already addressed to the lab) are much more likely to put those samples in the provided envelope and mail to the lab for testing than is a promoter who buys bulk empty cups off Amazon or at their local CVS. The lab makes its money from submitted samples, not on supplies.

3. A promoter that knows the difference between a LAB REPORT and LABORATORY TEST REQUISITION FORM. You, the athlete, should never receive a copy of the form you filled out backstage at the contest BIG RED FLAG!!!! (and, yes, this happens a lot too). There are two copies of the LTR Form. One copy goes in the envelope along with your sample, the other stays with the client (promoter) so that he/she can match results to donor once the lab testing is complete. If the promoter hands you one of the copies (putting the only other copy in the envelope and leaving no copy for themselves) it is a sure telltale sign that your sample is going no further than a trash can somewhere nearby.

4. No "cash only" phony testing methods, like polygraphs, pinky promises and scouts honor - one in the same). Polys are ineffective (which is why they are not used in any professional or collegiate sports, or for the Olympics) and serve as quick and easy cash for the promoter and directly out of the pockets of the athletes - pure and simple!

5. No buzzwords being applied in an effort to make testing seem "official."  Examples are "IOC" testing, "WADA" testing and/or "Olympic-level testing." Neither the International Olympic Committee, nor the World Anti Doping Agency has the interest or inclination in testing anyone's bodybuilding contests. For that matter, neither does the FBI, CIA, Dr. Oz or Dr. Fauci!  BOTTOM LINE: Be aware of phony name dropping that tries to make drug testing look official!

6. There won't be banned substances in your competitor goody bags, given out as samples or sold at the show via a sponsor table. (Yes, this happens at many "Natural" contests - a banned substance in each competing athlete's goody bag that would most certainly lead to a positive test if the promoter was actually sending urine samples to a lab.).

7. The urine sample collection process will be closely monitored by show officials or third party collectors. If you are handed a cup and sent into a restroom by yourself, you can conclude that the testing at that show is phony. Once you are tested following correct procedures (like with the NPF) you will quickly understand the difference.

2021 CONTEST SCHEDULE IS UP HERE 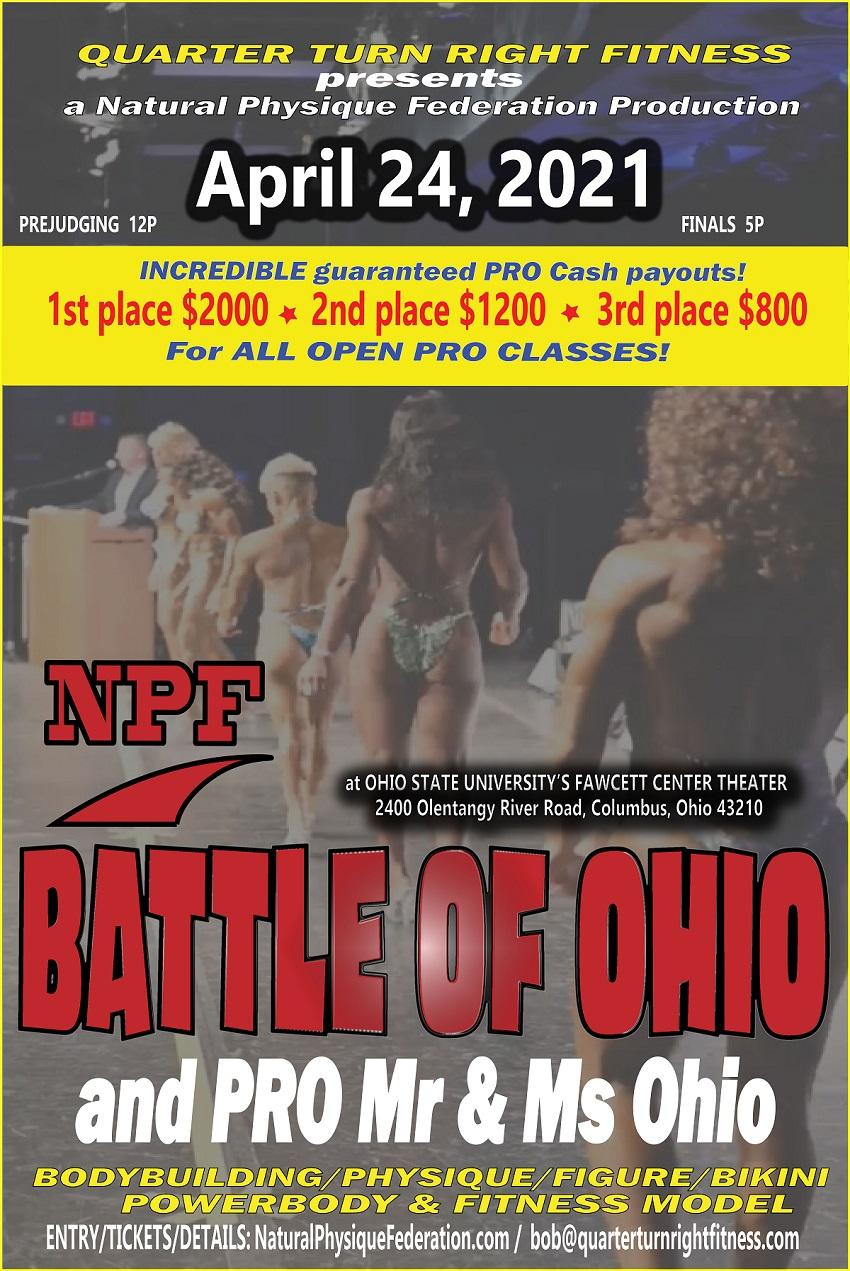 The Natural Physique Federation, has continued to experience growth in an industry that as a whole has experienced a steady decline in membership and contest entries for the 6th straight year - now surpassing 50% of what it was in 2014 (2 years prior to the formation of the NPF).

Here are some highlights of accomplishment for the NPF from 2020:

• NPF Sandows - our year end championships - was blessed with a growth of 100% as we doubled our entries compared to 2019.

Setting aggressive yet attainable Key Performance Measures each year has been paramount to our continued success. We couldn't do it without the athletes, spectators, coaches, and behind the scenes supporters.

Jamie and I, on behalf of our incredibly hard working staff look forward to serving you again in 2021!

NPF President and Director of Events